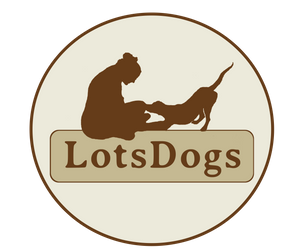 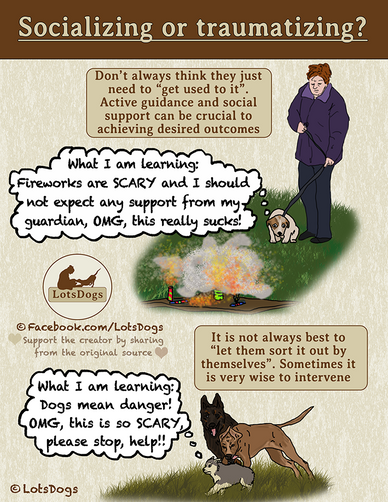 In 2016 published research suggested a correlation between social exposure at an early age and fear and (most likely) fear driven aggression in dogs later in life. People who had been very actively ‘socializing’ their pups ran into more trouble than people who had not done so.

How could this be? This contradicts other research that proved the importance of exposure and socialization at an early age to prevent fear driven behaviour.

Most likely, the underlying cause for those contradicting results was that the dog owners had unintentionally exposed their pups to new stimuli in a negative setting.

“Have your puppy see and meet as many different types of dogs, people, traffic, etc. as possible!”

This is something I read very often. People are advised to take their puppy out into busy cities, into public transport, to dog parks, to children’s playgrounds, etc.

The amount of different stimuli that a puppy needs to experience is emphasized.

Though the intentions are good, this type of advice can backfire and turn into a disaster for puppies and their owners.

The emphasis should not be on how much the puppy needs to be exposed to, but on how to best expose a puppy to their living environment and the outside world.

Exposing is not the same as socializing

Socializing is about developing socially acceptable behavioural responses towards the environment. Ideally, we like to see dogs who behave relaxed, tolerant, social, etc. This is not something that automatically develops during exposure. Socialized behaviour can only develop when the puppy has neutral or positive experiences around those stimuli.

If a puppy is introduced to new stimuli in a severe negative way, resulting in a severe negative experience for the puppy, then socializing could unintentionally become traumatizing. This can occur when a puppy is not able to increase distance or escape from whatever it finds threatening, or when a puppy is not given time and space to recover from challenging experiences. Negative, stressful and fear evoking experiences can have a deep impact in the dog brain. Especially if there are no healthy recovery options. Dogs will want to avoid or (in some cases) actively scare away (with fear driven aggression) whatever they find threatening.

In example, a puppy owner takes their puppy to a busy dog park and the puppy is repeatedly trampled on and/or chased by large dogs. The puppy is not given any options to avoid or escape these dogs. As a result, this puppy may, in the future, try to flee when it sees other dogs, or this puppy may respond by barking aggressively and trying to intimidate and chase away other dogs.

Another example, a puppy owner takes his dog to a class in which the puppy is exposed to loud noises. The puppy is not given any chance to escape, to seek comfort or to recover. Though the intention was to get the dog to tolerate loud noises, the severe negative experience at an early age has made this dog become extremely stressed whenever loud noises occur.

Socialization is not just about exposure, it is about guiding a puppy through an experience in such a way that they can develop neutral or social responses and neutral or positive expectations.

How to offer guidance during socialization

Start by becoming aware of the welfare needs of dogs. Knowing what a dog’s needs are will help you in safeguarding the physical, behavioural and emotional needs of your dog.

One very important welfare need for dogs is having a sense of control over their own experiences. Giving the puppy the opportunity to make choices and setting the puppy up for succes in working out and overcoming mild challenges independently, can boost the puppies confidence. Make sure to create environmental set-ups in which the puppy is mildly challenged, but not overwhelmed. Have the puppy gather information at it’s own pace at a suitable distance and always offer your comfort and support if the puppy feels the need. This will increase the recovery speed. When a puppy becomes aware that it can recover from things that it finds challenging or threatening, the puppy will become more confident in approaching, knowing that it can always find safety if needed.

If your puppy is showing acceptable behaviour around stimuli, you may reward this actively, as this will increase the behaviour, but be aware that using rewards may also increase the emotional arousal of a puppy (positive emotions also cause arousal) and this may sometimes interfere with the desired learning process. In a perfect set up it is sometimes better to have the puppy figure things out by itself, rather than interfering the process by adding arousing rewards. Other times, using rewards such as food or toys is adding great value to the experience for the puppy.

Do intervene and offer active guidance if you see your puppy struggling and not being able to recover from an experience (i.e. if your puppy is being bullied by other dogs and is not given any space or time/breaks to recover, help your puppy out!). Remove your pup from the situation and see if you can create a better set up, in which the puppy is able to recover and deal with the exposure in a desired (and physically and mentally healthy!) way.  As long as the puppy has time and space to recover and is able to make choices in regards to the amount of exposure, they may very well be able to handle a bit of stress, fear or frustration. However, if this is not the case, severe stress can become a severe negative experience and ruin the socialization process.

I love this quote I once read from Debbie Jacobs of fearfuldogs.com: “Like teaching a kid to swim. Start where they won’t drown."

© LotsDogs | Written by Liselot Boersma, dog welfare & behaviour consultant (PgDip CABW) and owner of LotsDogs, december 2016, translated in june 2020. Copy paste of images or text is forbidden. Sharing the URL of this website is very much appreciated. Many thanks in advance. 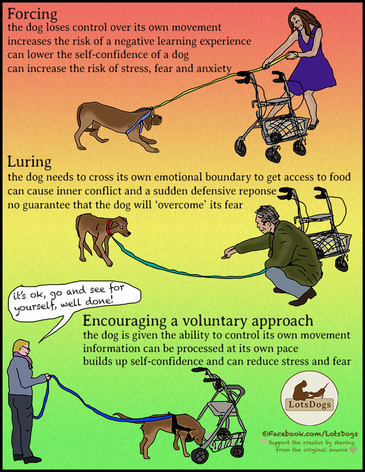